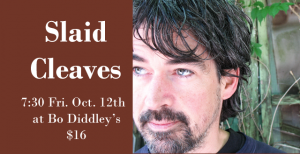 Slaid Cleaves’ thumbnail autobiography reads: “Grew up in Maine. Lives in Texas. Writes songs. Makes records. Travels around. Tries to be good.” Cleaves began his musical career in Ireland, busking on the streets of Cork, before making Austin his base.
Since then he has toured nationally and internationally, released a dozen recordings, and won the Kerrville Folk Festival’s New Folk competition in 1992 and the Austin Music Awards Best Song of the Year for “Broke Down” in 2001. His list of inspirations and “favorite stuff” includes Irish musicians Christie Moore and the Pogues and all-Amerian troubadours Hank Williams, Woody Guthrie, Bob Dylan, and Bruce Springsteen. In the liner notes for Cleaves’ album “Everything You Love Will Be Taken Away,” fellow Maine
native Stephen King writes, “Listen, go to one of Slaid’s shows, take a friend, and pass on the news: not all the good guys wear hats.”

“He phrases like a grifter trying to croon his low-down past away–and writes like he knows he never will.” –Roy Kasten, River Front Times, St. Louis

“Of all the singer-songwriters to come out of Texas in the past 20 years, few if any approach the lyrical and melodic consistency of Slaid Cleaves.”
–Jim Caliguri, Austin Chronicle