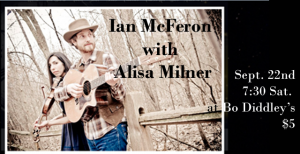 “These songs were all probably written in cheap hotels in the middle of the night, and history tells us that’s where the best ones come from.”
–Alan Harrison, Maverick Magazine (UK)

“An alt-folk/rock/Americana performer who strikes a cool balance between the mellow and the edgy.” –Jim Beal, San Antonio Express-News

“He is the real deal and isn’t faking it.” –Charlie Brown, The Music Critic (UK)
Facebook Page:
http://www.facebook.com/IanMcFeronMusic

**Our coffeehouse shows feature quality lesser-known artists in a slightly
more informal environment than our main series. Tickets are not sold in
advance, house lights are turned down — not off — and discreet patron
conversation is allowed during the show.