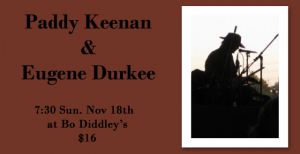 Paddy Keenan is said to be uncomfortable with the
label “King of the Pipers,” so we will only
assert that he is a virtuoso on the
bellows-driven Uillean pipes, a founding member
of the enormously influential Bothy Band, and
recipient of the Irish Music Association’s
Uillean Piper Award in 2010 and its Lifetime
Achievement Award in 2011. Bothy Bandmate Dónal
Lunny called Keenan “the Jimi Hendrix of the
pipes,” so be prepared for an evening of Irish
intensity. Keenan will be accompanied by
Boston-based Celtic guitarist Eugene Durkee. www.paddykeenan.com

“In Irish music there are legends and legends and
then there’s Paddy Keenan.” — John O’Regan, Rock’n Reel

“I can’t believe how much energy he can wail with
on those pipes.” –Guitarist Steve Morse of the Dixie Dreg