Even though “Mean” Mary James grew up mostly in Florida, California, and Tennesse, she can count as another honorary Minnesotan, having briefly lived Way Up Nort’ when she was four. She has played banjo, guitar, and fiddle since early childhood, made her first record at age six, and was performing on TV by the time she was in second grade. Her music is a mix of originals and traditional tunes that reflect her southern upbringing.

“The voice of a ragged Angel combined with the banjo playing of the Devil. . . . If you do like stories, harmonies, good guitar playing and actual mastery of the banjo you’ll fall in love with Mean Mary James.”–Alan Harrison, No Depression Americana and Roots Music

“An exceptional singer and musician who picks a blistering banjo and delivers bluegrass staples like “Rocky Top” and “Cripple Creek” as if she’s been doing it all of her life–which indeed she has.”–Deborah Bell, Designinggeek.com 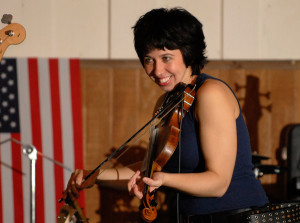