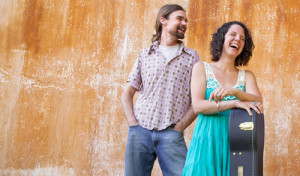 Dave & Mandy’s debut duo album, Seed of a Pine was recorded in Chicago during the summer of 2011 with renowned producer Zach Goheen and includes contributions from a litany of acclaimed musicians, including Wisconsin singer-songwriter Peter Mulvey, Po’Girl/Birds of Chicago songstress Allison Russell, and JT Nero (Birds of Chicago). With this release of the songwriters’ first official collaboration, the duo’s striking ability to blend their lush folk and Americana-influenced styles is on full display.
McGraw’s consoling, velvety baritone voice, reminiscent of Greg Brown, coupled with Fer’s soaring and subtly powerful vocal approach, likened to that of Patty Griffin, puts a spit-shine polish on the finely crafted body of songs they have generated together. The intricate weavings of their vocal harmonies are undeniably exceptional. McGraw’s hard-hitting tunes echo narratives of the culture and landscape of the American West, wherein he thoughtfully spins tales of everyday folks looking for a little something more in their earthly existence. Fer takes a more dreamy approach, evoking complex and ethereal imagery within her sultry and haunting melodies. Her potent electric lead guitar playing, in the vein of jazz-fusion guitarist John Scofield, bravely propels this duo through their uniquely heartfelt and spirited live performances, winning over audiences night after night.