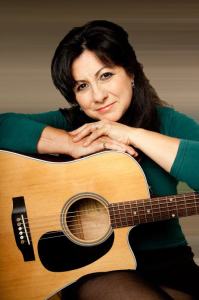 She is a folksinger recording in both Spanish and English.  Known for singing both traditional Mexican folk-songs and her own original songs, both in Spanish and English, Hinojosa accompanies herself on guitar, which she plays right-handed although she is naturally left-handed. Her 1992 album Culture Swing won the NAIRD Indie Folk Album of the Year.