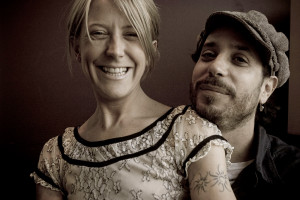 Danny Schmidt and Carrie Elkin are based in Austin, TX, but their record label, Red House, makes them honorary Minnesotans. They perform and record as soloists and, as they will for us, as a duo. An evening with either one is worth catching; together they promise more than double the fun. Fun squared? Except that they’re the opposite of square.

“Schmidt is a stellar poet and musician, and media comparisons to a string of legends are not amiss. He’s too original and too good for a mere cult following.”–Dirty Linen Magazine

“With beautifully crafted, lonesome pines music and complex beguiling words, he would’ve fitted neatly on the bill at any ’60s coffee house alongside Townes Van Zandt or Leonard Cohen.”–Q Magazine