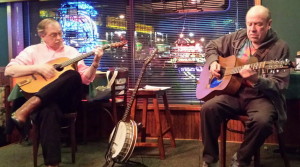 Dan Preston and Russell Letson have been playing with the same bunch of  musical friends for nearly twenty years–in trios, quartets, the odd quintet, and, when nobody else shows up, as a duo. Dan has a long history on the local music scene, playing bass or guitar in rock and variety bands (notably the Preston &amp; Paulzine Band), and Russell has a
not-quite-as-long history of sitting in on guitar with whoever will put up with him, including a decade or so with Mike Thole as part of the Acoustic Project. Neither Dan nor Russell can predict what they’ll play next–a little country, a little swing, a little folk, maybe a dash of Nine Inch Nails or some Stephen Foster.