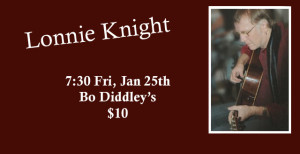 Lonnie Knight has been part of the Minnesota music scene since the Surfin’ Bird first flew our skies: Multiple Minnesota Music Awards winner; member of Jokers Wild and the Hoopsnakes (among other bands); session player and record producer; singer-songwriter. Tonight, he is solo-guy-with-guitar, and you won’t be able to take your ears off him.

“I don’t know anyone who isn’t in awe of his guitar playing. His songwriting is incomparable with interplay (no pun) between melodic instrumental lines and pure lyrical poetry. He’s a master.”–Madeleine Hart

“His singing has that dark, reedy feel, like a tenor sax gliding through the changes. He’s telling his story as he dives and swerves, and it magnetically pulls you along.”–John Ziegler, Duluth News

We do not take reservations—at Bo’s – and do not set tickets aside without payment.
Seating is assigned according to ticket purchase date for shows at Bo Diddley’s. Requests taken