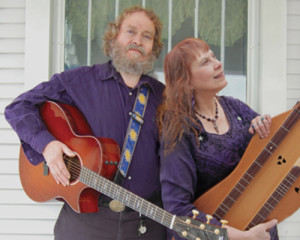 As far as we’re concerned, we are the ultimate Folk Music act, a living demonstration of the idea that Folk Music is a continuum, uniting songs as young as a few weeks to as old as hundreds of years.

Phil and I first met in 1983. Phil had already decided that his musical mission was the preservation of English language Traditional music, and his business partner in that endeavor, Margaret Nelson, was a fine Traditional singer. Phil was already well known at that point as a truly gifted guitarist. I, on the other hand, had been playing guitar for only about a year, and wasn’t anywhere near ready to be playing in public. However, I had already decided that my musical mission was to be a songwriter in the Folk tradition, using my considerable facility with words to write story songs and humorous songs reflecting the world around me. At that time, there was a fierce, almost war-like opposition in the Folk scene between the writers of new songs and the singers of old ones, a division that persisted for many years.